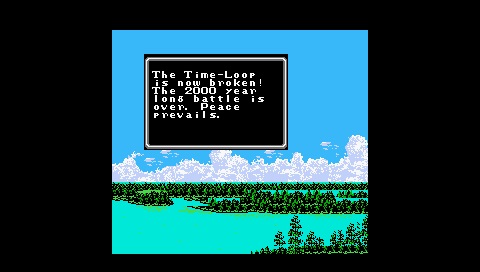 Control of the four elements, the Earth, the Wind, the Fire, and the Water, again belongs to the earth.

Garland’s hatred burned for 2000 years. That hatred led the Four powers to this world.

CHAOS was created from those Four.

Evil dominated the world and covered it in darkness.

But, it is over now, wrong has been set right!!

The LIGHT WARRIORS are returning…. As they travel in time, the world returns to normal.

Sara and Jane wait for them…. Of course, Garland does too.

But, when did it ever happen?….

Everything went mad in a day. The reason lies in the 2000 year Time-Loop.

The Four chose to become one force, and fight against the four evil forces that set darkness upon the world.

When the Four return, it will be to their past. All signs of the battle with the Forces will be erased.

But the legend will live on. Passed down by the Dwarves, the Elves, and the Dragons….

Passed on by peoples unsure where the story came from.

The LIGHT WARRIORS return from their journey back in time 2000 years.

The memories stored deep in their hearts will protect the world.

Never forget the good and true….

Never turn the Four Powers to the dark side….

And truth will always live in the hearts of the people.

The Warrior who broke the 2000 year Time-Loop is truly a LIGHT WARRIOR…. That warrior was YOU!